There is nothing easy about talking to kids about school shootings and confronting the feelings that follow horrific events like the one that occurred at a high school in Parkland, Florida just over a week ago. From overwhelming heartbreak to furious anger, its normal for emotions to be raw, conflicted and full of passion and pain. But as school shootings increase, one of the most frustrating feelings to emerge is familiarity. Following the shooting at Columbine High School in 1999, people reacted with horror and confusion. It was one of the first school shootings of its kind and people struggled to comprehend how such a thing could happen. After the events at Sandy Hook Elementary School in 2012, the despair was so deep that a lack of action to address this trend felt incomprehensible. So more than five years later, with events like these accumulating by the dozens and with literally no legislation on the horizon, one of the hardest emotions to reconcile after last weeks shooting in Florida is the ines-capable familiarity. Somehow, school shootings have gone from being a rare tragedy to a tragic reality.

There’s no one way to address tragedies with children, and how parents approach it depends both on the child’s age and temperament. Avoiding the topic with young elementary schoolers probably seems preferable to most parents, but ultimately for those that think their kids may hear about a shooting from other students at school, it might be worth proactively starting a conversation at home. But before this can happen, its essential that parents try to process these tragedies themselves. Just like airplanes that require adults to put on oxygen masks before putting them on their children, parents have to try and reconcile their own emotional responses.

One of the most delicate aspects of having this conversation with younger children is the desire to shield them from unnecessary fear while also feeling the need to increase their awareness of the world around them. For young children, the conversation can be as simple as telling them that something very sad has happened and that they may hear people talking about it at school. For kids in early elementary school, focusing on themes like bravery and courage can keep the conversation re-affirming.

Talking to kids about school shootings can get more complex as they get older. Adolescents today have never been more aware of the world around them. Older kids have grown up with the internet and have instant access to endless information. By the time a parent asks their tween about a school shooting, the tween may already have more information than the parent. For kids in this age-range, its important to listen and to ask questions. This may be a good opportunity to learn about concerns that your child has that they’ve never had the chance to express.

With teenagers the conversation about school shootings can be even more complicated. In addition to having access to endless information, teenagers have also been through this before. The sad reality is that the for highschoolers today, they have grown up in a world where school shootings are somehow considered a normal part of their lives. Most teenagers are inherently looking for hypocrisy in the world and for the first time in their lives, many are willing to take action. So their frustration with the ongoing familiarity of school shootings is both telling and essential. Sometimes it takes a teenager to see a complicated issue in its simplest terms. For teenagers that have grown up seeing a problem with no solution in sight, this could be a call to action. For some, the adversity of this tragedy could be their first opportunity to force change.

Teens may be disillusioned with the partisan politics that so often accompanies the aftermath of these tragedies. While adults are arguing about the NRA or gun regulations, kids simply see inexcusable inaction. Some adults and lawmakers are hesitant to talk about school shootings in their direct aftermath; perhaps fearful that they will be labeled as opportunistic, or more likely because they want to avoid the issue entirely. But others see this cautiousness as an excuse to not engage at a time when it has never felt so important. Perhaps nothing stands in starker contrast to the indecision of adults on this front, than the raw response of teenagers that were actually present at the shootings in Parkland, Florida last week. For these kids that were forced to witness this tragedy first-hand, their response is simple. They want change. They want it now. And they have no idea why it’s so complicated for adults to figure out and address. ( https://www.vox.com/policy-and-politics/2018/2/15/17016136/majority-stoneman-douglas-parkland-david-hogg) As usual, sometimes its the teenagers that see a complex issue with the most obvious clarity.

Its possible to dream that when this generation comes of age, they will be able to enact actual and effective legislative change. But in the meantime, the raw frustration of our youth can be a genuine opportunity to redirect their energy towards a call to action. Whether its engaging with local representatives, seeking a career in public service, or organizing meetings, its important for teens and young adults to know that they have a voice. For some teenagers, opportunities like these can be galvanizing and inspiring. Its often social issues that first stir the passions of teens and by empowering their voices, adults are also giving important self-confidence to a demographic just learning how to harness their emotions.

For parents looking to take action on this front, also consider the following:

For more information or to schedule an appointment please contact me at alex@akleintherapy.com. 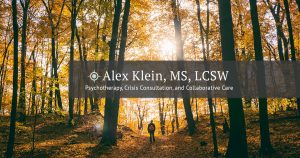